DCH thanks to the agreement signed with Aces Europe, presented yesterday the European Sport and Healthy Company Award in the European Parliament in Brussels, making this award coincide with the prizes of Sport Capital, City, Community and Villa.

The goal of this award is to certify the effort of those companies that promote sports and health among their employees valuing having a clear commitment to sport, physical activity and the health of employees, have sports facilities or in collaboration with third parties and specific action programmes for workers in Health and Sport and have physical headquarters in at least one member country of the European continent.

The winners this year have been SEAT, by Spain, and BorgWarner, by Portugal, who yesterday picked up the award in Brussels at the hands of Gian Francesco Lupattelli, President of ACES hand Europe and Juan Carlos Perez Espinosa, President of DCH.

SEAT awarded to the Europeann Sport and Healthy Company Award 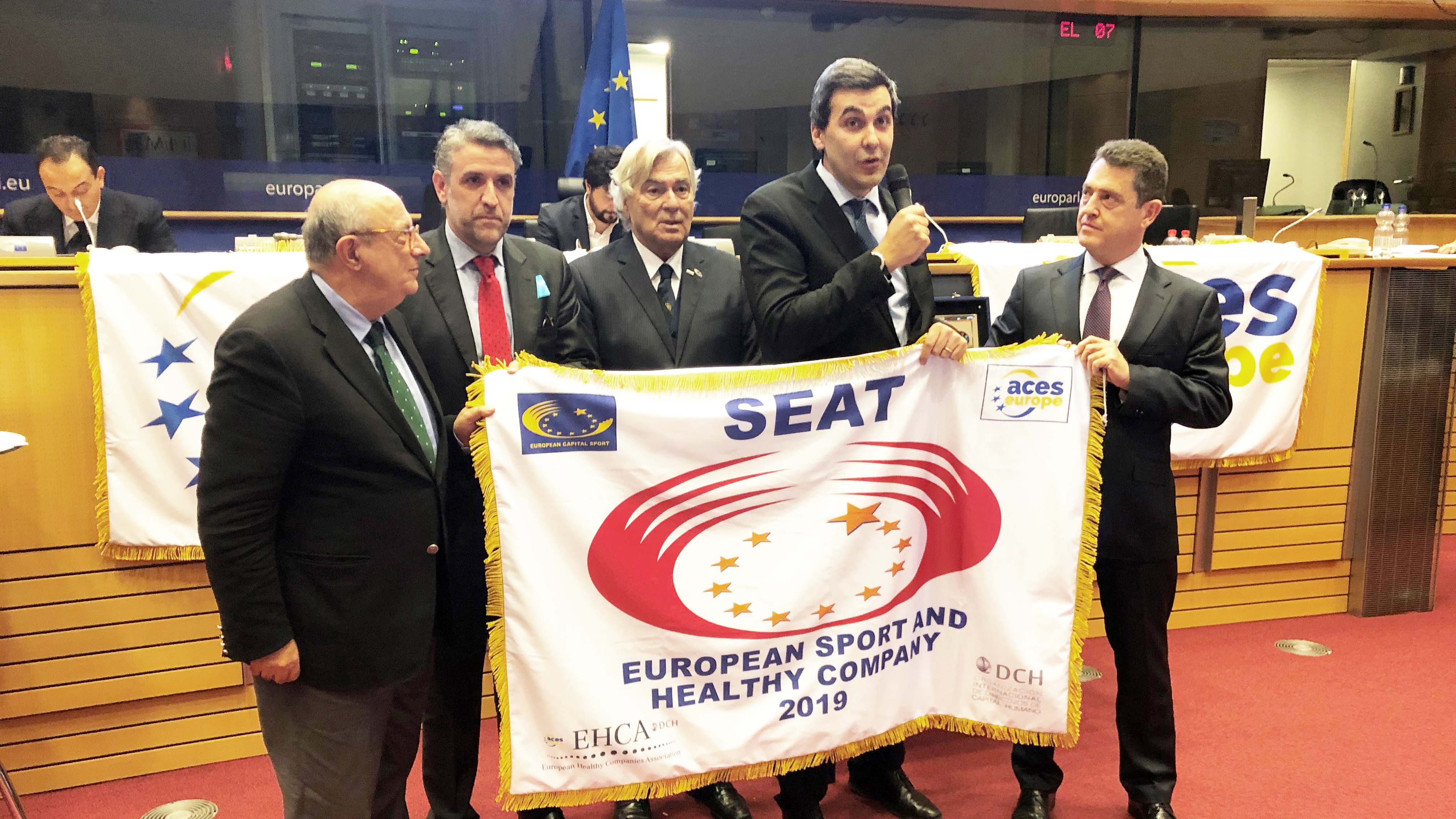 By SEAT, received the award José Navarrete, Manager of Health and Safety Strategy. Dr. Patricia Such, Responsible for Safety and Health at Work of SEAT, said “we are very proud to have received our first recognized as a company that stands out in the field of health in Europe. The award supports our work in favour of health, the safety and welfare of our workers, which has resulted in projects such as CARS, the creation of the Scientific Committee of Healthy Company or the scientific study MedCARS that we will soon have results”.

BorgWarner awarded to the Europeann Sport and Healthy Company Award 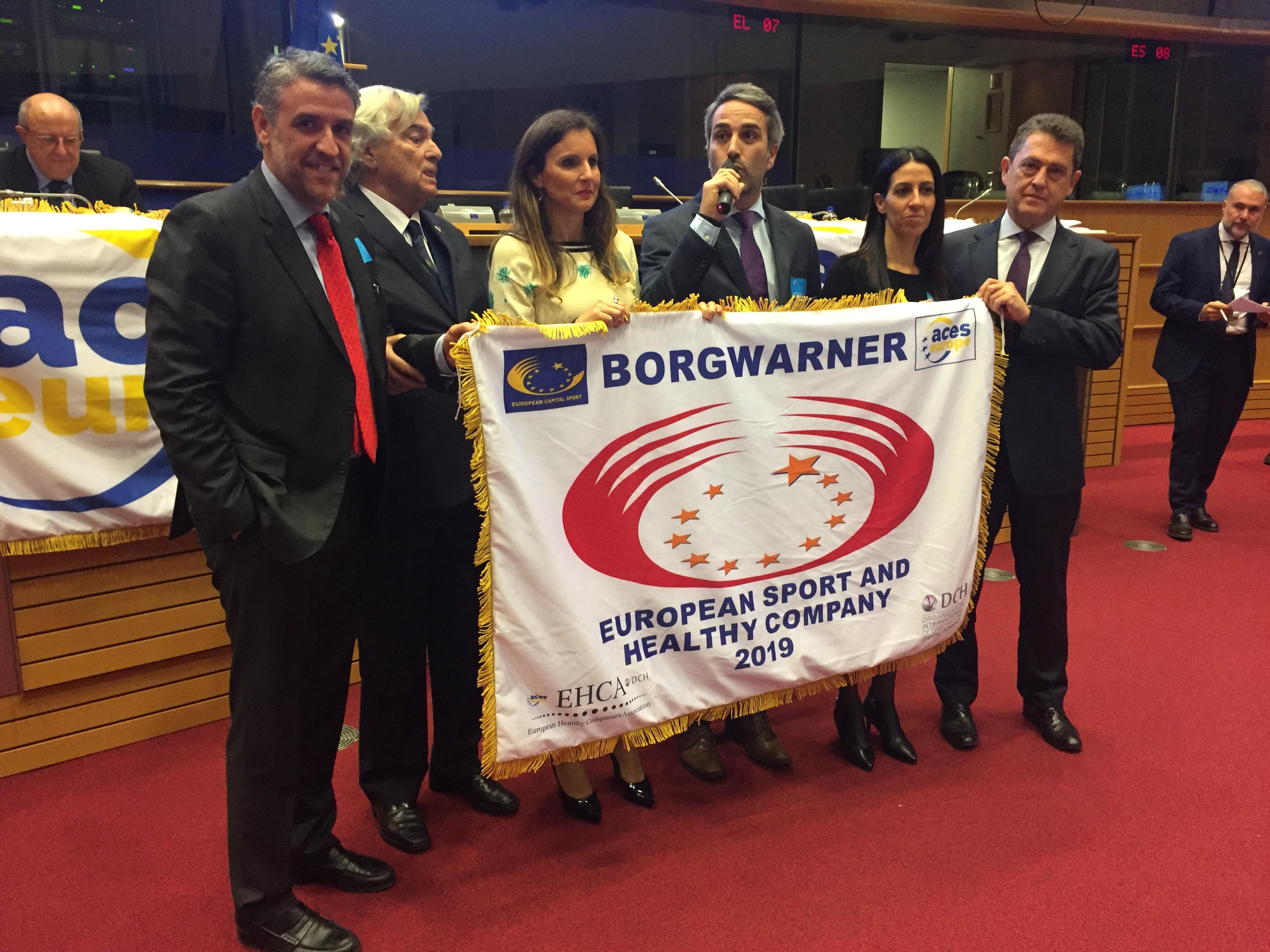 By BorgWarner collected Prize Pedro Abreu, Director General, Ana Silva, Human Resources Director and Rita Moreira da Cruz, Head of Compensation and Benefits. Pedro Abreu said “we are proud to invest in products of high added value and be prepared for changes that is expected in the automotive sector. Adaptability and flexibility are critical success factors and we seek them incessantly. Our challenge is to be able to develop solutions with the latest technology using a wide experience in engineering”.”

Ana Silva said that “the Award European Sport & Healthy Company 2019 represents for us a very important recognition, because it shows our strategic guidance on health, sport and the well-being of our employees, essential for the achievement of our goals, and they are reflected in our benefits plan, crucial to achieve this award.”

Next year will be held in Budapest, elected European Capital of sport 2019 by Aces Europe, a Gala that will bring together all the companies awarded so far and companies committed to the health and the sport of its employees, in order to share best practices in this area.

SEAT is the only company that designs, develops, manufactures and sells cars in Spain. Integrated in the Volkswagen Group, the multinational, headquartered in Martorell (Barcelona), exports 80% of their vehicles and it is present in more than 80 countries on five continents. In 2017, SEAT achieved a profit after tax of EUR 281 million, sold almost 470,000 cars, achieved a record turnover, and reached a turnover of more than 9,500 million record. The multinational, which is the first industrial investor in I+D of Spain, already offers the newest technology in connectivity in its range of vehicles and it immersed in a digitalization process to boost the mobility of the future.

BorgWarner Inc. is a global leader of products in technology, clean and efficient combustion, hybrid and electric vehicles. With technical facilities and manufacturing in 66 locations in 17 countries, the company employs approximately 29,000 people worldwide.